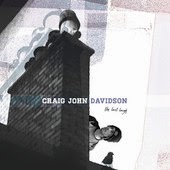 
Following three self-released albums, this 26-year old singer / songwriter from Aberdeen has finally found himself a record deal (with a Scottish independent label) for this latest offering. It’s an album of accomplished and accessible alt-acoustic music on which he’s played most of the instruments (mostly a variety of guitars) himself. He’s fond of double-tracking and using plenty of effects on his vocals, but fortunately he judges this well and it helps to give his music a unique, lush, slightly ethereal character. The lyrics here are rather vague and, although there may be only limited changes in style throughout the record, sometimes it’s good to get into one mood and stick with it. Davidson also has a real knack for coming up with memorable, original melodies, notably on tracks such as ‘Therefore Thereafter’ and ‘It Moves’.
This is a lovely record which improves on repeated listening and should find favour with fans of Iron & Wine.