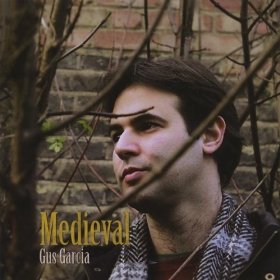 Medieval
Brazilian Gus Garcia has been resident in London for a few years now, and put out an excellent three-tracker, Many Hiding Places, back in 2009. This follow-up took some time for an EP but it was worth the wait - the results show real progress and it's obvious that Gus and his co-producer Dan Cox have worked hard to ensure that this eclectic collection of five songs sounds as good as possible.
There is little discernible Brazilian influence in this music - British rock and pop from both the sixties and the later Britpop era seem to have played a greater part in the development of this particular artist. Having said that, this EP is no mere homage as Gus has delivered a convincing and individual work of artistic depth and maturity.
Opener "Clocks and Crocodiles" is a charming, upbeat affair, although the theme of disillusionment - which seems to run throughout the songs here - breaks through as he sings "whistling for the land I do not come from, it's such a struggle, much more than I hoped", suggesting that life as an expat has not always been easy. The next track, "Rhythm", is a slightly manic pop number which gives Gus a chance to show off his impressive vocal range on the choruses, not that he ever sounds like he's showing off - indeed, his voice is both confident and, for the most part, easy on the ear in the best way. Although his voice does not betray his origins, it still manages to sound like him rather than an impersonation of an Englishman. "Two For One" contrasts effectively with the previous song, being a slow ballad picked out on an acoustic guitar until the electric guitar and drums finally come crashing in over half-way thrrough. The drawn-out melody on this song does not always display Gus's voice to its best advantage, but it features some nice lyrical imagery as the narrator ponders the tales he has heard about a place "where worries are just blackbirds in the night", but remains sceptical as he's "no fool no more". The fourth song here, "Medieval", is also the title track, and it's no wonder that it's been chosen as the centrepiece - this is a monster track by any standards, a superb arrangement with a strong melody, big drum sound and an unforgettable guitar lick. Always an enigmatic lyricist, one doubts whether anyone other than Gus will ever work out what this song's about, but when it sounds this good, who cares? The EP closes with "The Sailor", an echoey, atmospheric piano-led number about a sailor having to abandon his love and return to the sea. As another complete contrast to all the previous songs, it makes for a fitting end to a collection from an artist who is hard to pin down but never fails to intrigue, surprise and come up with a damn good tune. ( www.myspace.com/biconan )


Martin Dowsing
Posted by martindowsing at 14:38