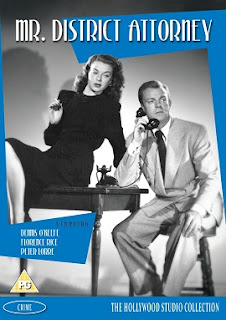 This DVD is a recent release from Odeon Entertainment, and a rather surprising one at that; the film is obscure and largely forgotten - and, indeed, probably only really of interest to diehard Peter Lorre fans like myself. It's a light and zippy affair clocking in at a mere 68 minutes, and leans far more towards comedy than the crime drama or even noir that some may expect. Having said that, the film is never dull and there is plenty of snappy dialogue (one character is described as being "colder than a penguin's beak", for example). The mostly second-rate cast do rather well, the direction is always competent if seldom inspired, and there's even quite a good car-chase climax. Peter Lorre is hardly stretched and there's not enough of him, but he has one memorably menacing scene which he underplays nicely. All in all, worth a look for those who enjoy Hollywood films of this vintage, and the print quality on this DVD is excellent... shame about the depiction of the hotel clerk, though - a cringeworthy racial stereotype unfortunately typical of this period. The DVD has no extra features.
Posted by martindowsing at 14:26