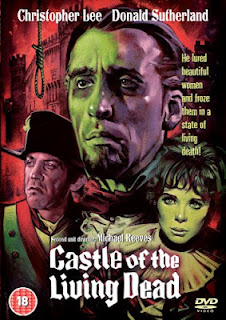 Just after the Napoleonic wars, a troupe of travelling players accept an invitation to perform at the castle of Count Drago - a sinister nobleman who has allowed his embalming hobby to get somewhat out of hand...
Another recent release from Odeon Entertainment, this turns out to be surprisingly good in many ways and should be a real treat for vintage horror fans. The black-and-white photography, art direction, locations and musical score are all splendidly atmospheric. Donald Sutherland makes an intriguing film debut in two roles - he plays both a police sergeant and an old witch straight out of Macbeth who even speaks in rhyming couplets! Christopher Lee as Drago (with goatee and dark circles around his eyes) is his usual imposing presence. The script has some nice touches but misses an obvious opportunity to make Drago a more complex, interesting character. The film was shot in Italy with all of the dialogue dubbed on later; it has to be said that the dubbing is not terribly well done and also features a peculiar mixture of accents. The good news is that the film has been digitally remastered for this release and presented in its original aspect ratio. The cover has Michael Reeves (of Witchfinder General fame) prominently credited as Second Unit Director, which seems a little desperate. The only extra is the original trailer.
Posted by martindowsing at 14:46